from the District of Highlands Heritage Task Force Report "Recommendation for a Heritage Register"....

Description of the Historic Place


The Lime Kiln is situated at 1980 Millstream Road, in the District of Highlands, British Columbia. The kiln location is marked by a pile of loosely arranged rocks and earth on the east side of the main parking lot in front of the District of Highlands municipal office. About 6 feet up the rubble bank is an arch of brickwork with an opening, approximately 50 inches at its widest, leading into the rock and brick-lined access chamber of the kiln. At this level, the extent of the larger kiln structure, approximately 15 feet wide in front, can be identified by the lapped rock work that are the remains of the two front corners of the kiln, in line with the partially blocked access. The rest of the mound, formed mostly by the rock and brick remnants of the kiln, is covered in brush and trees. The historic place consists of all surviving elements of the lime kiln as well as the mound, surrounding rock rubble and overburden.


The Lime Kiln is valued because it provides historical evidence of the important role lime burning played in the economic history of the Highlands District. Lime was used for making calcium oxide (commonly known as quick-lime), a component of the plaster and mortar used in early construction methods. This kiln was in operation between 1887 and 1907, providing work to various Highlands pioneers. The Lime Kiln is also valued as a rare example within the region of a specific type of kiln construction. Although it has the same basic footprint as the more structurally intact Atkins Lime Kiln on Hart Road in View Royal, it is likely that the burning area of the Highlands kiln had less volume, and consisted of a rock and brick limestone/fuel reservoir of lower vertical height, without a metal casing. Part of the kiln foundation on the east side was likely formed by a natural rock outcrop, which probably also served as the loading point for limestone and fuel. The only visible steel remains on the surface at the Highlands site, are two large reinforcing rods that likely helped stabilize the main reservoir. The access to the kiln eye, or grate, of the Lime Kiln demonstrates outstanding design in its construction. The curved brick work inside the access is completely intact, and well integrated with rock and steel elements to create the grate, the area where lime was collected after burning. The grate and eye are about 20 inches wide, and are located about six feet inside the entry to the access area. 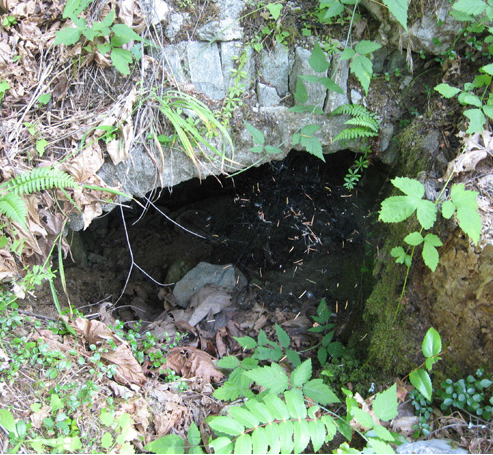